Similar to the vaunted Columbiad Cannons, The Rodman Gun was designed in 1815. Large pieces, they were ideal for both siege and Coastal defense duties. The smallest “size” of The Rodman series was an 8-inch (with the largest at 20-inches). Noted for their “soda bottle” shape, Rodmans were cast iron (in an innovative manner) – that included flat rear cascabels. They also featured multiple elevation screws for setting range and distance. Hollow cast, they were especially strong and resistant to the natural powder gas erosion (that plagued most larger caliber guns). Rodman's innovation casting method (which cooled the barrels from the inside out) made for stronger cast iron. Non-rifled, they required gun crew of between 8 and 15 men (depending on size of weapon). The Rodman range from almost 4,000 yards to 8,000 yards (from either deployment use). Due to their weight (between 8 and an impressive 115,000 pounds), Rodman Guns (once placed) – remained in their position. Most Rodman Guns were replaced by the 1890s. 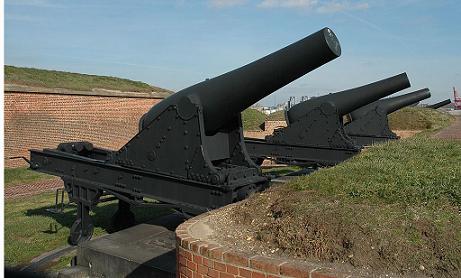