The Organization known as PETA (People for The Ethical Treatment of Animals) - did not exist in The late Middle Ages. It was probably a good thing, too. They would have no doubt gone insane with this  improvised weapons system. Developed by German Artillery Master Franz Helm around 1530. His theory was to gather up hundreds of stray cats (a common commodity in The Era). The poor felines would have jars of a mixture consisting of gunpowder, flammable "jelly" and iron shrapnel. Sealed with cloth or clay, a slow fuse (timed) -was the final attachment. Strapped to the back of multiple cats. The already terrified felines would be released by the hundreds, towards an enemies lines. The fuses would soon ignite and (in some cases), "lift" the cat slightly off the ground  (hence the name "Rocket Cat"). Although not used often, examples were cited from the Sieges of Tripoli, Kazan and Eger (1551 to 1553). 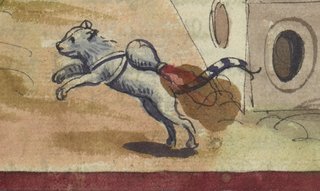