Given Modern views, it is easier to say “what” Robin Hood as seen in surviving Medieval ballads was not. He was not the dispossessed Earl of Huntingdon, he was not an Anglo-Saxon freedom fighter against Norman oppression. Most importantly – he did not live during the time of King Richard I (but closer to the reign of an King Edward). Associated with Yorkshire and Sherwood Forests -his true “devotion” was to The Virgin Mary (and not Maid Marion). First seen in ballad form around 1377, various sung stories of Robin go into the 1450s.

Other stories (written), put Robin into the time with Herewald of The Wake (a known outlaw very similar to Robin Hood). In fact, one Robert Hood (who was a Porter of Edward II), seems to be a much more popular candidate. He is listed as an “outlaw” around 1226. More likely any “Hood” became popular among the Peasantry. Robin was a “freeman”. That was an attractive position to be in. Further, Robin used force without the slightest fear to plunder only evil and wealthy landowners and the like. Their “ill gotten” gains was – after all, off the sweat of their toils. Attacking cruel Sheriff's (a Lord's Enforcer) and Nobles was a fantasy that all Peasants had. Many wanted out of their stations in life so bad – it was a normal thought. Geoffrey Chaucer used a “Robinesque” figure. Being a Writer who could “tap” into the common man's thoughts makes Robin Hood an excellent “plot device”. By the 16th Century onward (and after some 250 years of literary evolution), Robin Hood (as we know him) – was firmly established. Most felt that he was a real person by this time.

In most of his early ballads, Robin is more of a Swordsman (and less of a skilled Archer). The Longbow (while primitive), is still an elegant and deadly weapon. Requiring many years of training, a Sword was considered too “easy”. Still, the idea of a Robin Hood (and of course his mission of maintaining the “power balance” in The Middle Ages was important for a common man's sense of “escapism”. 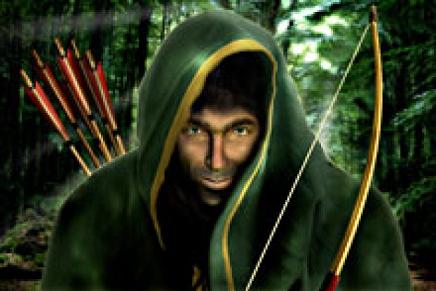