As old as time, in The Middle Ages – The Robe became a symbol of power and Authority. Seen instituted as such around the 10th Century (in England) – The Robe was also seen as a functional piece of clothing. Often, when granting a position within “The Royal Circle” (Administrators, Sheriff's Baliff's etc), a Robe of Office was given. Thick, full length – they were often made of the precious fur (so many associated with wealth then). Such a piece of clothing was warm (especially inside cold Castles). Soon, Nobles and persons of Title were embellishing them in their own styles, tastes and colors. Soon regulations were enacted to specify “what type” of Robe was used for which particular Office. By the 14th Century, these regulations were squarely set. Most importantly was color (so as not to allow any Nobleman to use a Royal color. Also, special piping and designs were incorporated to identify Office. 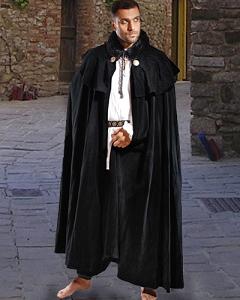