Known by his nickname “Butch Cassidy”, he was the leader of the infamous “Wild Bunch” Gang that terrorized much of Wyoming and Colorado. His gang in it's heyday consisted of 15 well known local Outlaws. Horse theft, cattle rustling, railroad and stagecoach robbery – nothing was off limits to Butch and his gang. The Union Pacific Railway Company hired the famed Pinkerton Detective Agency to protect it's property and hunt down the gang. His secretive hideout spot, nicknamed “The Hole-In-The-Wall” was located in The Big Horn Mountains of Wyoming. Known to only a few, it was a deathtrap to anyone attempting to attack the gang there. Slowly however, one by one of Butch's gang fell to The Law (mostly in gunfights when gang members came to town). Butch and his long time partner Harry Longabaugh (aka The ''Sundance Kid''), escaped to Bolivia, South America. Legend has them dying in a gunfight with Bolivian soldiers. 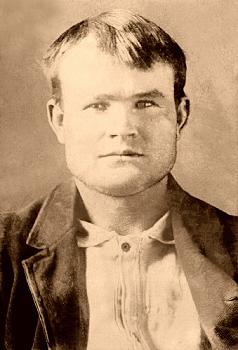