With scant information, Robert Culliford was born around 1666 in Cornwall, England. Leaving home early, Culliford went to Sea and became a Privateer. Hiring on a French Cutter, he was a Shipmate of another future famous Pirate, William Kidd. With the outbreak of The War of The Grand Alliance in 1688, the two incited mutiny on their Ship - The ‘’Saint Rose’’ – and commandeered the vessel for England. While their loyalties were in question, they most likely were enticed for the huge Bounties. Most of their Booty was taken to The Americas and sold (Boston). However, much of their wealth would be re-taken by French Warships. In all case, Culliford and Crew escaped. Culliford and Kidd broke company soon after the end of The War. Culliford would turn Pirate and Kidd – Pirate Hunter. The two former “friends” became bitter enemies.

Culliford would ply his trade well off The Caribbean, evading Kidd with every tur. He would settle down in an unofficial “Pirate Settlement” on St. Mary Island. Well known to the likes of such “legendary’’ names as Swan and Everly, he would live well until British Warships arrived and wiped out The Settlement. Convicted to hang for Piracy, Culliford’s intimate knowledge of his fellow Pirate Captains, gave him a Pardon in exchange for informing. After many trials, Culliford disappeared into History, with some citing his moving to Boston, Massachusetts under an assumed name. 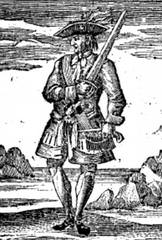