There is not much known of Captain Richard Worley's past. Born in England in the early 1690s, he may have emigrated to the New York Colony (America). Worley and a crew gained a small ship and began to work the New England Coast. Worley is credited as being one of the first Pirate Captains to use a Skull and Crossbones as a symbol of his trade. He and his crew moved down to The Caribbean (The Bahamas), and began to work Spanish shipping (making a small name for himself). It was around this period that English monarch King George I issued orders to track down all Pirates. A dedicated ship the HMS “Phoenix” a 24-gun warship, was sent out to deal with Worley. He was able to evade his hunter – by returning back to the American Coast. Near Jamestown (Virginia Colony), he and his ship foolishly tried to “blockade” Jamestown Harbor. Coastal cannon racked his ship. Refusing to surrender, a Militia boarded Worley's ship and took him and 19 of his crew into custody. They were said to have been executed on February 17, 1719. Some historians state that this event was propaganda, and that Worley and his crew were killed in battle. 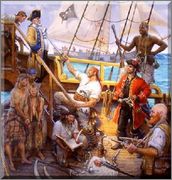