Born in 1452, Richard III was briefly King of England – following the death of his older Brother, Edward IV. He served his Brother faithfully in all his endeavors (1461-1483). Richard suffered from a severe spinal condition (a form of Scoliosis) as well as having a deformed arm. Made Duke of Gloucester by Edward when Richard was only 9 – when older, he led several successful invasions against The Scots. With Edwards death in 1483, his Son Edward V (then 12), was set to become King. Richard took the Crown from The Regent (Elizabeth – Edward's wife).

Intrigue led to torture and murder. When Richard declared himself King, open rebellion broke out between the two sides supporters. Richard's former Ally – Henry Tudor, led the Opposition. Henry amassed an Army in Wales in 1485 and marched to met Richard at a place known as Bosworth Field. Richard and Henry were present to lead their “Armies”. History takes a unique turn now. Richard is killed in battle and Henry Tudor (and his linage) – would take the throne of England for MANY years. It was said that Richard was struck in the head and neck (luckily NOT being beheaded).

His body was said to have been somewhat “mutilated”. His “reputation” as an “Evil and Ruthless King” was probably created by The Tudors to “justify” THEIR claim to the throne. Many records show that Richard was not “as bad” as earlier portrayed. Nonetheless, it was said that he was buried first in a mass grave with his soldiers and second (a later legend) - “that his body was thrown into The Soar River. What history now tells us is that neither story was true! Apparently Richards body was taken by The Greyfiars (a Monastic Order), and unceremoniously buried in their churchyard. Richard III remained their for over 600 years. It was blind luck (and careful scientific investigation) – that would finally “locate” his remains, under a Parking Lot in 2013! Richard III (once identified via DNA) – was finally given his “Royal Burial”. 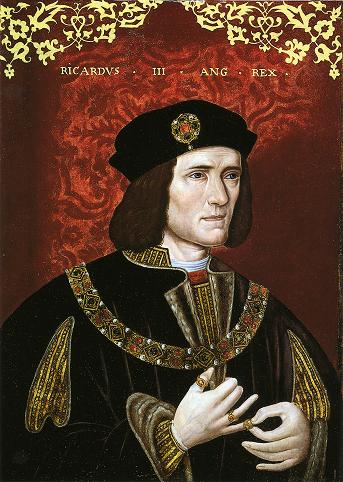