Developed in the 14th/15th Century, this early "gun" was considered a volley weapon (or multiple shot). As many as 12 iron barrels were setup parallel to one another on a wooden platform. Held in place by iron strapping or a wooden cross support (for stability), the barrels could be from 2 to 5 feet long. When fired (in theory) a "volley" of multiple bullets (small lead shot), would discharge towards an enemy. ALL the barrels had to be ignited at the same time. Realistically, this weapons failed more than fired. In a good case scenario, several barrels would in fact fire (and killed) troops. Most often, misfires and explosions were the order. Various types and designs were experimented with (some more effective than others). The Ribauldequin was a good beginning  to the coming Age of Firearms. 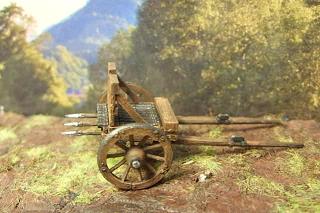