A form of trouser-like wear worn by Men starting in the 17th Century. Developed in Germany, they were also called "Petticoat Breeches" (after their similarity to Women's petticoats). Rhinegraves extended from the waist of the Wearer to a point slightly above the knee. At their ends, ribbons or cloth was placed as a form of fashion. The waist was cinched in place ny a series of sewn in cloth ties. The sides of The Rhinegrave Breeches extended outwards or "ballooned". This was part fashion and part comfort.

Worn mostly by Titled men, colors and materials were often as varied as construction styles. Often silks and felt backed muslin were used. These articles were hand sewn and - with embellishments, took time to make (hence their expense to procure). The Rhinegrave Breeches would spread to Spain, France and England as "high fashion" for a Man. By the 18th Century, Men's trousers and related "dictates of fashion" made The Rhinegrave obsolete. 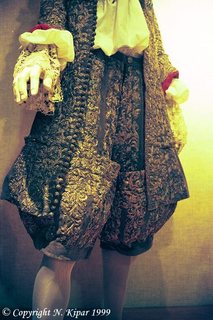