Possible the first example of a “comic book” or Newspaper strip Cartoon character, “Reynard The Fox” was a “serialized” figure seen in French literature, in the 13th and 14th Centuries. The Fox was given “human” qualities and traits (and even interacted with humans as one). Reynard was used to impart Social “values” to readers of his stories. The actual Author of “Reynard The Fox” is unknown. Different illustrators and painters portrayed him (with the original “creator” now lost to time). His books (and later pamphlets) were a popular past time in Medieval France. His “adventures” carried over to England and Germany as well. 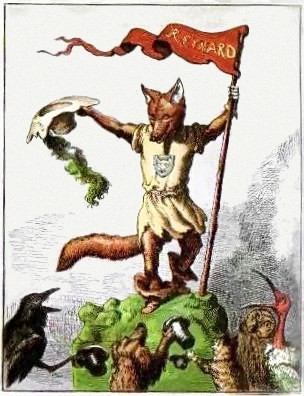