Also called a “Retiarius”, these Fighters were among the first of the Gladiators developed for The Arena Games. Considered a “low” Rank, The Retiarius was so named for the 4-spiked Dagger he carried as his primary “kill” weapon. He also carried the somewhat iconic Trident (or 3-Spiked Fork). The worn Manica Armor often with a raised neck guard The Galerus). They wore no helmet or other protective armor. They also were known to carry a Throwing of Snare Net (similar to a Fisherman's Casting Net). This was an important weapon. It practice, The Retiarii would try and snag or snare his Opponent's legs, weapon arm etc. Once snared, he could then use his Dagger weapon. The Retiarii was pared with other supportive specialized Fighters (in teams). 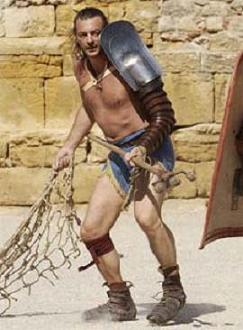