On of the first Volley Guns put into service by The US Army, this weapon appeared in July, 1861 (2 months after the start of The American Civil War). Invented by Dr. Josephus Requa (a Dentist), the first prototype cost the "huge" sum of $500 USD to build (at The Billinghurst Armory). The initial tests with the US Army did not go well. However, President Abraham Lincoln saw the weapon and was impressed. With his backing, the weapon was mass produced and pressed into service. The Requa Battery saw service at The Battle of Cold Harbor (1864),  the attacks on Forts Sumter and Pulaski, and again at The Siege of Petersburg. The weapon consisted of 25 heavy iron barrels each capable of firing (1)  .58 caliber lead round. Ammunition (25 rounds), was loaded into a metal clip.

The weapon fired one shot per barrel. Hand crank operated, it could fire 175 rounds per minute (with constant reloads). The weapons (while somewhat more reliable than other attempts at Volley Guns, it still had it's share of misfires). The Requa had an effective range of supposedly 1,800 yards. Although The Requa Battery ceased production in 1865, it's initial design and idea would inspire other weapons developers to push forward with more reliable automatic weapons. 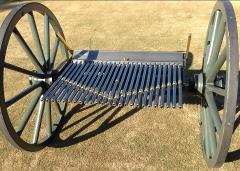