The Army of The Republic of China, wad formed in early 1942, in response to Japan's invasion of the Nation's Mainland. Although poorly equipped, they were assisted by both American and British Governments. The Republic was officially part of the Allies who were at War with Germany, Japan and Italy. The Republic of China's Army used a Flag based on the National Colors. The Flags Field was Red on entirety. Centered, was the symbol of The Nationalist Party - a Blue Field with White radiating Sun. The Flag was abolished in 1949 when The Communist Party won The Chinese Civil War. 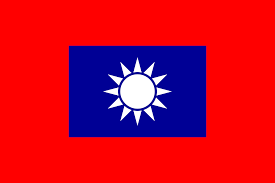