The Redan was a V-shaped Salient angle (extension of a Curtain or Defensive Wall), built toward an approaching enemy. Redans can be temporary structures (wood or earth), or of a more permanent design (stone or mortar). Developed from Horn Work designs, they began to be seen around the 16th and 17th Centuries. Primarily seen with artillery and cannon emplacements, Redans were common fortification features in Portugal and Greece. The Knights of Malta were known to use The Redan style with their Fort building. Redans were also used by Russian Forces against Napoleon at The Battle of Borodino (1812). 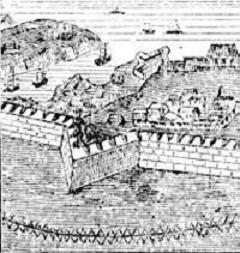