Much has been said about the somewhat “legendary” Battle Cry known as “The Rebel Yell”. The use of what has become known as “War Cries”, are as Ancient as they are varied. The practice is linked with “Warrior Ethos” and Espirit de Corps. The American Civil War of 1861-1865, was no different. Although a high level of Patriotism and elan was felt in The North, it was almost a frenzy in The South. The Southern mentality was completely different. This was in no small part to the reason that The South was the physical “instigator”.

Almost with the first major Land battle, The Battle of Bull Run Creek (Manasas, Virginia) – the emergence of The Rebel Yell battle cry was heard. It’s description varies due to the fact that no true audio recordings exists of it. Said to be a cross between a Native American “Whoop” with a “scream or howl” generated by a Rabbit, when preformed en masse. It was described as “terrifying” to hear. In this way, The Rebel Yell was very much a psychological “weapon”. A version of such wad captured in fashion. At the 1935 Anniversary of The Battle of Gettysburg, Pennsylvania. There, 70 and 90 year old Veterans of both sides met, in a show of solidarity and peace. Some Southern Veterans duplicated The Yell, but obviously – much of it was lost with age. 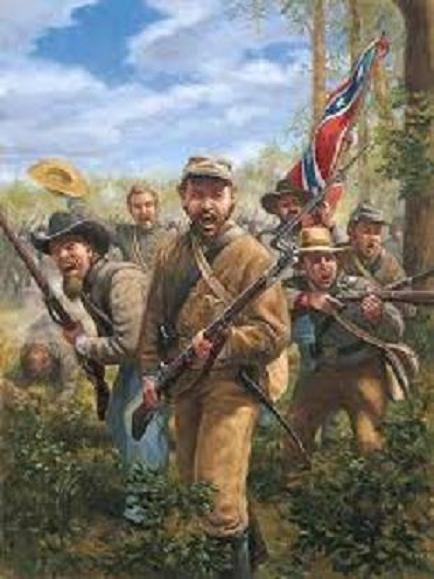 Authors Note: A Link is provided which provides a Reproduction of a reputed Confederate Rebel Yell. Click on it to hear.