Another popular form of 15th Century international currency, The Spanish Real de Acoho was a .750 fine, 427 once Silver piece. Nicknamed "The Spanish Dollar" by The English, The Real bore the image if Philip V. The 8 Escudos version was divisible into 2, 4, and 6 denominations. This established The Real's new - "A Piece" or "Pieces of Eight". The Real was said to be the inspiration for The US Dollar (as in South America, The Real was called the "Dolar". The coinage was very popular with Pirates, as the exchange rate was constant. By 1869, the last "Piece of Eight" was minted. 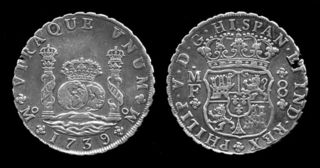