Noted for it's long thin blade and extremely sharp point, The Rapier was seen in Modern Europe in the late 16th and 17th Centuries. Rapiers are also identified by their complex and ornate hilts (sometimes called baskets). A typical Rapier weighed a little over 2 pounds and had a blade length of 38 to 40 inches long. Although double-edged, the Rapier was never intended as a cutting blade, but more of a stabbing/thrusting one. Their ornate hilts were made of steel or brass and featured a "wrapping" design to better protect the hand of the user. Another feature of the Rapier was it's oversized pommel. Often used as a Dueling weapon by many in the 17th Century, the Rapier was considered an expensive weapon. It's cost could normally only be afforded by the most wealthy of noblemen. Often deployed with matching Small Swords and Daggers (sometimes even Buckler Shields). The Rapier became a form of "status symbol" among noblemen. Although the weapon (and it's variations), became the predominate weapon throughout Europe, they were seen in great numbers in Spain and Italy. Scabbards were not normally used (due to the blade length) - but some were made. 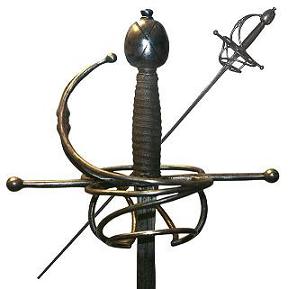