As with ships being used for warfare is as old as Man himself, one of the first forms of ship borne defense was The Ram. Seen before the Ancient Greeks, Rams were built as part of the warship (as the Dromons, Penteconters and Triemes, would attest). The “prow” was often reinforced with sharpened iron and would extend outwards from the ship some 15 to 25 feet. (Often placed under the hull and obscured from view), the theory of use was simple. Ships of the Ancient Era were mostly human powered (by Oar). By building up sufficient speed (and aiming for an enemy ship), one could ram the enemy and hopefully cause damage enough to sink the ship. Obvious drawbacks were one's ability to withdraw one's ship before BOTH vessels went down! Experimentation with Ram building (and every Nation had their own designs), would lead to one of the more famous “Rams” - The Athlit. Discovered in 1980 off of The Coast of Israel, this solid bronze Ram was dated to around 270 BC and weighed over 1,000 pounds. The Athlit is “thunderbolt shaped” and would have easily caused lethal damage to an enemy.

The continued use of The Ram as a warship weapon would continue well into the 18th and 19th Century. The American Navy used Rams successfully on several Classes of their Ironclad Warships during The American Civil War. The French Navy also had much success with Ram-Class vessels. It should be noted however, that most Ram damage was done to wooden warships (via an Ironclad). No documentation exists to show Ironclad Ram vs Ram being sunk by one or the other. Although “antiquated” by World War I, example of Submarines ramming ships with “”Deck Rams” are documented, as are stories of Ships “cutting” low-surfaced Submarines in half, as well. Rams for weapons would become obsolete with the advancement of weapons systems (such as Radar) of the early 20th Century and beyond. 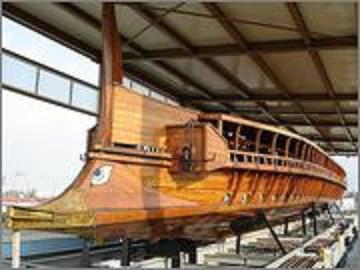