A Lakota Sioux Warchief, ''Ite Omagazu'' (or ''Rain-in-The-Face'') was one of the instrumental component Forces of Warriors used by Chief Sitting Bull, against US Army Lt.-Colonel George Armstrong Custer 0 at The Battle of The Little Big Horn River, in 1876. Possibly born in 1835, He was of The Hunkpapa Band of The Sioux. His name (and deed in achieving it), was said to have been from when He was a young boy. A Cheyenne War Party attacked His Village. His Mother was among the casualties, of which ''Rain-in-The Face'' promptly killed Her attacker. His Enemies blood splattered His face (like ''rain'' - hence his name).

Ite was also present at the infamous ''Fetterman Massacre'' in 1866 – earning His courage as a fierce Warrior. He would continue as an aggressive fighter against ''White Settlers'' and The US Army, that at one point, The US Army placed a ''Bounty'' on ''His Head'' for either ''capture or death''. Even Custer was aware of His activities when He took Command of The 7th US Cavalry (1866). Ite would be captured by Captain Tom Custer in 1874 (but would escape, thus leading to a possible ''grudge'' against The Custer Family).

Evading re-capture, Ite would merge His Band into that of Sitting Bull's Lakota in early 1876. At the start of The Battle of Little Big Horn, Ite was said to have sought out Tom Custer, killing and mutilating His body. There was even ''rumors'' that it was He who ultimately killed George Armstrong as well. This rumor was so persistent that as late as 1880 (after He and His Band were finally captured and placed on a Federal Reservation), Eastern Researchers sought Ite out to ''confirm the tale''. Ite denied the tale (although with Custer being ''lionized'' as a Great American Hero, He may have just said He was not responsible for fear of being killed).

However, before dying of a prolonged illness in 1905, ''Rain-in-The-Face'' was said to have ''confessed' to killing George Armstrong at The Battle (citing that he was so ''close as to have burned Custer's face with gunpowder from the shot) – to a Missionary. The ''legend'' has still to ever have been supported by other Native American ''Survivors'' of The Battle. 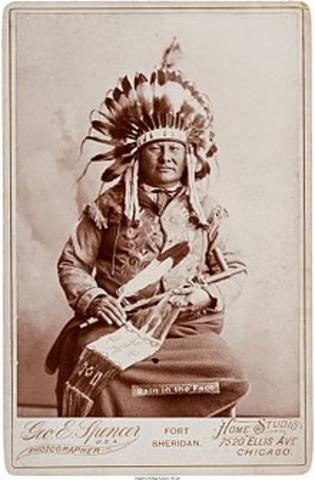