As we have seen, Men were not the only ones who “raised high” The Jolly Roger of Piracy. Many infamous Women too cast their lot as “Wolves of The Sea” as well. One such was Rachel Wall. Born in 1760 in Pennsylvania, Rachel lived an unassuming life on a Farm. At 16, she net and married George Wall. The two moved to Boston, Massachusetts where Rachel secured a Position as Household Servant. Her Husband George had other ideas. He convinced Mary to accompany him to Sea as a Privateer. The lure of quick money was too great, and Rachel became America’s first Female Pirate. The two did well against both American and British Commerce Ships, until George got himself killed. Undeterred, Mary would recruit her own Crew and purchase her own Shop – The “Salty Cat”.

Rachel considered herself a Coastal Pirate, attacking from the relative safety of Coves and Inlets close to New England. She did very well from 1781 to 1789. But her greed grew too much. In 1789, several US Revenue Cutters outmatched her and her Ship. She was captured. In her Court Testimony, Rachel attested to the fact that she never had killed anyone. Her goal was robbery and not murder. The Court did not take this into consideration and found her guilty. She was hung in October of 1789, going to her grave as the last Woman ever to be hanged in Massachusetts. 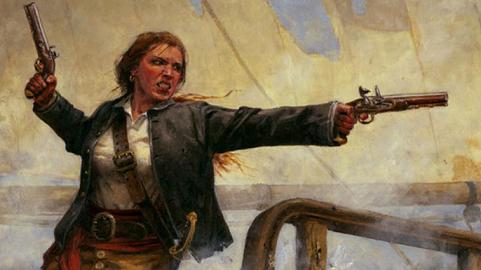