Developed around the 4th Century BC during The Hellenistic Era, The Quinquereme was a type of large wooden Warship. Commonly used by Ancient Greece, other Mediterranean Countries adopted versions of The Quinquereme. Classed by modern Scholars by their rows of Oars used for propulsion, The Quinquereme were known as “5”, or rather – that many rows of Oars. The deign of these Warships involved a primary Hull, upon which was built multiple or “stacked” Decks. Each of these Decks extended slightly over the Lower or previous Deck.

Oars were positioned in such a way was to reach over precious  (successive) Rows. This meant longer Oars progressively as Decks rose upwards. In these terms, a “5” did not equate to only 5 Oars, but up to 25 to 30 per Hull side (or 50 to 60 total). All Quinquereme used some form of Sail Pattern. Depending on the Country of origin, 1 to 2 Masts were used. The Vessels were steered with large wooden Rudders. It is speculated that some of these Ancient “Super Ships” may have been classed as 6 to an unimaginable 10.

Sizes were claimed at 180 to 200-feet in length. Height was possibly 80 to 100 -feet (Beam). Crews also varied at around 60, but as Quinquereme also carried Soldiers, these numbers are unclear. Quinquereme were also said not to have been used as “Rammers”. This Ancient tactic involved the application of iron prows attracted to the Ship Front to pierce the Hull of an Enemy Ship. It was assumed that due to the expense on construction and size, such tactics may have been impractical. Some Ancient Historians cite great Fleets of Quinquereme existed, with numbers around 400. Some examples were also cited as having been incorporated into the early Roman Navy. 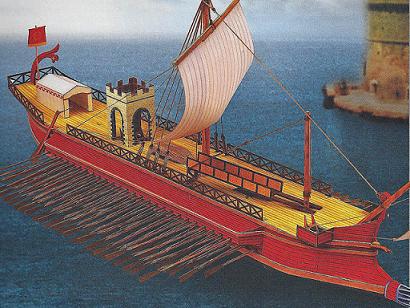