The Queen's Regiment of Horse was a Royalist Cavalry Standard carried in The English Civil War. The Regiment was dedicated to English King Charles I wide, Queen Henrietta Maria (who held the ceremonial Rank of Colonel). The Regiment, in addition to Royalists (Supporters of Charles I), - also had French Volunteers (Supporters of The Queen). They were mustered in to service in 1643.

The Regiment fought in several major English Civil War battles and a score of skirmishes throughout England. They originally numbered 700 Men with a Reserve Horse compliment of 150. They would disband in 1646 with the end of The First English Civil War. The Standard was a Royal Blue Field in it's entirety. A collection of (28) Fleur-ds-Leys in Gold (the symbol of France) were placed throughout. Mounted in the upper Top portion of The Standard was The Queens Coronet (Crown). 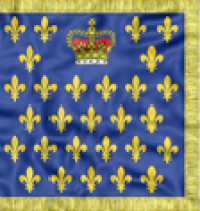