In Nautical terms, The Quarterdeck was that portion of the Rear Aft Main Deck of The Ship, roughly ¼ back and ¼ of the length of an average Deck, which formed a slightly raised platform. This platform would led to The Poop Deck. The Quarter Deck was where a Ships “Colors” or Ensign was kept. In Ancient Greece, The Ships Shrine (or Figurehead), was often emplaced there.

Traditionally, a Quarterdeck was used for special ceremonies. Due to this special nature, it was normally the best kept (cleanest) part of a Ship. Often surrounding woodwork was elaborate. Any Sailor’s assigned to Duties there had to turn out in their best and cleanest Uniforms. As such, all traditional Naval Customs were observed when on or passing through The Quarterdeck Area.  Visitors to The Ship were often conveyed to The Quarterdeck before going to The Captain’s Cabin. Often a special Gangway was devised and attached for Quarterdeck use.

Modern Quarterdecks now serve primarily for Helicopter Operations or for the storage of Radar and Sonar Equipment (depending on the type of Surface Vessel Classification). 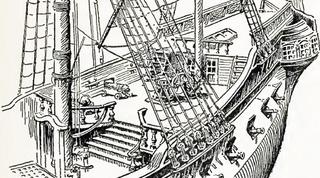