The Quadriga Chariot Systems was designed to use 4 horses for movement. Seen in use in Ancient Greece, Rome and The Middle East, they served primarily as a Sporting vehicle (especially in Races). They also served as emblems of victory and triumph. In Classical Art – a female Diety is often portrayed riding in a Quadriga Chariot. The Quadriga was also used to convey the God Apollo in his trek to bring Night into Day (and vise versa). The Quadriga construct was similar with reagrds to The Biga version. The main differences were that Quads had a wider cab platform 4.5 feet and were 5 to 6 feet long. Quads also had a single piece metal cab framing that created a taller semi-circular profile. Despite common misconception, Quadrigas were not used in combat. They were popular in many of The Roman and Middle Eastern Races of the mid- to late – Imperial Roman Period. Heavier than The Biga, they tended to hold turns better. 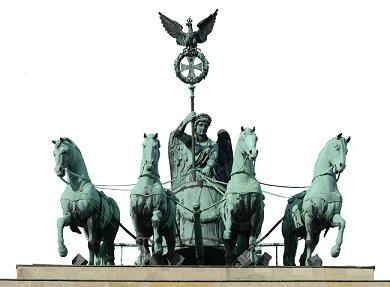