Also called ''Purple Vellum'', was a highly stylized parchment (pre-paper) form of writing implementation seen in the e3rd Century AD. The styles name ''purple'', refers to the dying process of Vellum (stretched lambskin), to a purple colored hue – by the use of organic (plant) material (dye). The ''sheet'' would be dyed a dark hue of purple. Upon this Illuminators, painting imagery – would also write (paint), with either s gold or silver based inking. The overall result produced a striking, bright writing, based on the then common Unical style of print. The use of purple coloring was even rare for The Era. The color used almost exclusively by both Byzantine and Western Roman Churches, and most often reserved for high ranking Clergy. Bibles and Liturgy were often made in purple parchment (especially when presented to an important Public figure.

Later, wealthy Families would commission such work on purple parchment (whereas only the wealthy could afford both the cost and have the education to read). By the e5ht Century AD however, ''Purple'' Parchment had fallen from use (seen by many as an ''excess''). The style was again briefly revisited by Carolingian Monarchs in the 8th Century AD, as again -  a form of gift (especially from The Church), and was viewed in ''high favor''. Very few surviving examples remain. 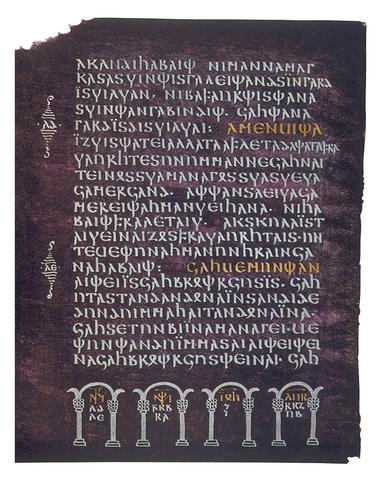