Also known as The “Potsdam Giants”, this was a specially formed Regiment of Germanic Soldiers created for “psychological warfare” ideology, by Prince Frederick of Brandenburg. They would later fall under personal command of King Frederick William I (Father of famed Prussian Military Leader Frederick “The Great”). Formed in 1695, this unique Unit was regulated to recruitment of Men at a minimum of 6-feet tall. Patterned no doubt out of the popular Grenadier Guard soldier, which was chosen for size as well. The “Potsdamer Risengarde” as they were also known, were noted for even larger physical examples, with several men documented at 7-foot. Frederick William I encouraged his “Giants” to procreate with physically similar women (6-foot or better). The Regiment was given every possible luxury, inclusive of distinctive uniforms of bright Red and Blue (to further have them “stand out” in battle). They were given them latest in weapons and the best of food. Such excess was stopped with the death of King Frederick William. Although still used up to 1806, with Prussia's defeat by Napoleon, The “Potsdam Giants” were disbanded. 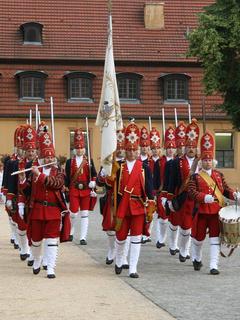