The Regiment of Guard Corps. was a famed Royal Mounted Bodyguard formed to protect The King of Prussia, Frederick The Great in 1740. It would later be extended to the protection of The German Emperor. Composed of Prussian Nobility (Sons), the Cavalry Branch received many of it’s Command Officers from The Corps. As such, service was seen as a type to training for Cavalry Officers. Appointment was very selective. Service was also seen as dangerous, whereas The Corps. was constantly the first “used” in Combat offensives. Using the basic Prussian White “Honor” Uniform for the majority of their History, The Garde Corps. wore uniforms somewhat similar to The Hussars. They were considered both “Light” and “Heavy” Cavalry (depending on their deployment and need). They were one of the only Units that used pure Silver in their Armoring.

The Regiment was a focal point used by Prussian against French Dictator Napoleon Bonaparte, and were noted in History for trying to “start” a War with France, quite simply by allowing groups of Garde Officers who would sharpen their swords using the stone steps of The French Diplomatic Embassy in Berlin (1806). Another unusual “habit” practiced by The Garde, was their training in sleep deprivation as a tactic in combat. This plus extreme physical stress were both common measures in training. The Gardes Corps. would remain a part of The German Imperial Army (as The Emperor’s Ceremonial Guard), up to 1919. Although disbanded, it’s ideals may have been adapted in Adolf Hitler’s SS Honor Guard of 1939-1945. 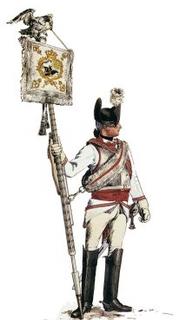