Considered elite among other Gladiators, The Provocator (or”Challenger”), was usually the most trained and experienced of his Classification. They were popular during Rome's “Republican” Period. The Provocator wore protective armor meant to mirror that of Rome's Legionaries. They wore a completely enclosed helmet with a full face Visor. The Visor had ample vision due to slats. These helmets were known for their long (and colored Plumes). The Provocator used a full Breastplate as well (and sometimes a Backplate). They did not use multiple leg Greaves (preferring only to use one). The carried a medium-sized version of the Roman Scutum Shield (often without Imperial designations). They did use both the full metal or linen Manica. They also used both The Spatha or Gladius Swords. ONLY another Provocator could fight another Provocator. 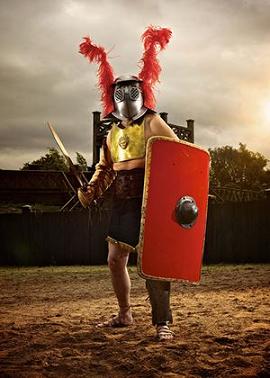