These were the "2nd Line" troops of The Roman Army. Being of a wealthier class, they could afford better weapons and armor than the "lowly" Hastati. They carried the larger Scutum Shield, Spear and Gladius Sword. They were often considered Heavy Infantry. Being 2nd Line troops, they were responsible for stopping the already slowed and hopefully tired enemy. The Principes had a higher level of morale. When Rome was still under Etruscan rule, Principes were used as Phalanx Troops (equipped with 15 to 25 foot long Spears). In those days, they were used much as the Hastati were. Under the new Roman Army, they were re-assigned their new roles. After the Marian Reforms, the Principes were restructured into Triarii troops. 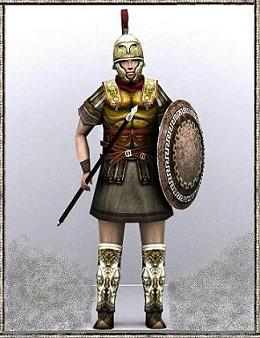