The name ''Praetorian'' derived from the Roman word "Praetor"  or Commanding General of a Roman Field Army. It was the style of Roman Commanders to chose bodyguards (normally ages 17 to 23) from the lower infantry ranks. They were tasked to guard the General's Tent and possessions. Created as an independent unit around 27 B.C. - in time only the elite were chosen. As was the tradition (since the time of the Tyrant Sulla), no Roman Commander was allowed to enter Rome with the entirety of his army. This was due to the very real threat of a military takeover (again as with Sulla). Still a Leader (or Emperor) as well as his family needed protection (from assassination). In it's "known" form, Emperor Augustus (Gaius Octavius), authorized 9 Cohorts (a basic Roman Unit) to be raised. About 500 men were chosen. This would later be increased to 1,000. Their main task was to protect the Emperor, his family and the Imperial Palace.

Praetorian Units participated in many wars for The Empire. They were considered the elite of the Army (and much hated by the standard soldier). They were fiercely disciplined. It was not uncommon for them to be turned out into the City to quell a riot or for crowd control. With the change from The Republic to The Empire, so too did the Praetorians change. Becoming more politically motivated, greed and corruption creep into their ranks. They were said to have been responsible for the death of Emperor Commodus when he failed to pay for their support. Aligning themselves with Emperor Maximan's son - Maxentius, they stood against Constantine. At the Battle of Milvian Bridge in 312 A.D. - they were decimated and their Preatorium Fortress was destroyed.

During their heyday, they earned 375 denarii (as opposed to the 250 a standard soldier was paid). Service in The Guard was 16 years (as opposed to the 25 a standard had to serve). Their uniforms were just as elite. They wore a ceremonial blackened armor breastplate and related equipment. Their "everyday" uniform consisted of a heavy leather breastplate (again blackened). They were the only unit authorized to wear the purple (ruling) color of The Emperor, as their identifier. 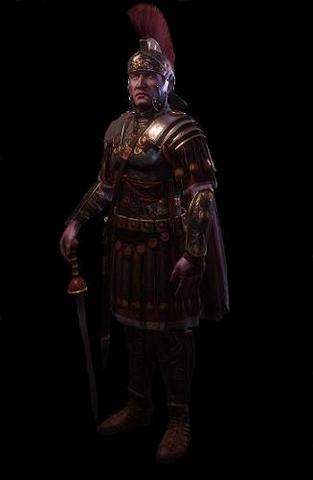