This primitive cannon was first seen in use during The Hundred Years War. Developed by The French, it's name means "Iron Pot". Made of cast iron, it was shaped like a large vase. It had a narrow tube with a large flattened front muzzle. The Pot de Fer was loaded with powder and stuffed with a large dart (wooden or iron). The dart's end was wrapped in leather (to better facilitate it's fir in the muzzle). A heated wire was touched to the rear bore vent, thus creating the explosion needed to propel the dart. Documented as having been used at The Battle of Perigord, Cambral and Quesnoy, it may also have been copied and used by The English as well (against The Scots). Several Period illustrations show the Pot de Fer in use. Although no surviving examples have been found, many reproductions have been recreated. Roughly 3 to 4 feet long, it is speculated that it took roughly 10 to 15 pounds of powder to ignite. No information survives as to how many darts could be fired in a time period. Many historians still doubt it's existence. 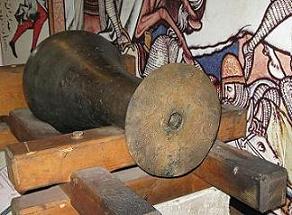