Considered one of the largest Warships built by Portugal, The “Padre Eterno” was built in 1663 (in the Colony of Rio de Janeiro, South America). Larger than any Warship afloat at the time, she displaced 2,000 tons and was 300 feet long. Her beam (height) stood at 35-feet. Sporting 144-guns (mostly heavy), “Padre Eterno” was tasked with protecting Portugal's interests in not only South America, but The Caribbean. During her service, “Padre Eterno” fought many Pirate engagements (for those foolish enough to try her). In 1667 however, she was lost in a hurricane in The Indian Ocean. 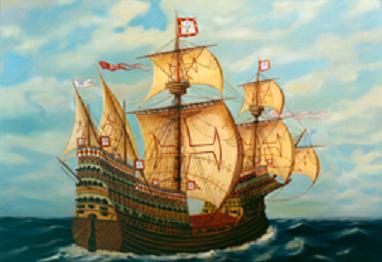