Located in Southeastern Jamaica, Port Royal is seeped in Piracy and Privateer culture and history. Originally claimed by Spain during Columbus' 1494 Expedition, strangely – Spain put no stock into developing Port Royal (or it's deep Harbor). Named “Tanio” by them, it was during The English Invasion of Jamaica in 1655, that control of the Port and expulsion of the small Spanish settlement was accomplished. It was The English who renamed Tanio “Port Royal”. By the late 1650s England had built 4 Harbor Forts and had over 200 Colonists and a thriving “Sea Port”. Port Royal would soon become the Capitol of the Island of Jamaica.

Naturally, as a major Port, trading and commerce thrived. With it came the influx of the notorious “Wolves of The Sea” - or Piracy. Most of Port Royal was under a somewhat lax English Government system. Garrison by Royal soldiers (as many as 300 by 1700), much was overlooked in way of “criminal offenses”. Prostitution and illegal Pawn Brokeries thrived. Piracy took hold with “masked” or “disguised” ships berthing in deep water (with crews coming ashore). Pirates such as Edward Teach (aka Blackbeard) and “Calico” Jack Rackham – both claimed Port Royal as “Home Ports”.

Soon, the local English Administration began to see Pirates as a necessary “evil” and would often employ them to help protect Port Royal from sea. The Royal Navy was much too occupied with Spain (and of course, those Pirates independent of Port Royal's “business relationship”. With the appointment of ex-Privateer/Pirate Henry Morgan as Governor of Port Royal, use of “Pirate Defense” changed. By 1687, Slavery (from Africa) – took on a more center focus. Port Royal became a major (if not THE) staging point for “The Slave Trade” into The American Colonies – as well as South America.

With the inclusion of The Piracy Act of 1689, Piracy became a dangerous occupation in Port Royal. Executions were rampant of Pirates (actual and suspected). Legends such as “Calico Jack” Rackham, Charles Vane and even Mary Read – all met their fate at the gallows of Port Royal. Port Royal began to develop into a major Caribbean Port. However, a massive undersea earthquake (epicentered some 10-miles near Port Royal) – literally “sunk” half of Jamaica (and engulfed most of Port Royal and it's Port). Although somewhat rebuilt, it never again reached the importance it held in the 1670s and 80s. Much of Port Royal is still “buried”, and it had become a treasure trove for Historians. 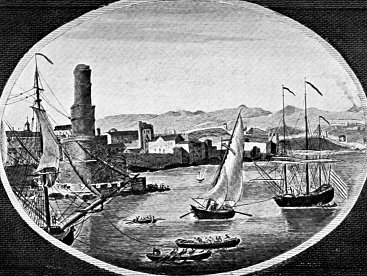