The first recorded use of these innovative Troop Movement devices are actually many Centuries in age. Mentioned in Ancient Greece  (5th Century BC) as well as in many Military engagements in China’s 14th Century – The Pontoon was a form of portable temporary Bridge which, when linked together with other Pontoons, created a land crossing for advancing or retreating Troops. Their use was seen primarily when no permanent Bridge structure was present or had been destroyed or otherwise disabled by an Enemy. Ancient examples were used in Rome with moderate success. First some reason though, their use diminished during The Middle Ages.

Pontoons  (from The French), were in essence “floatation devices”, which used longer land usual Skiff-type Boats. Typically, theses “Boats” ranged from between 12 to 15-feet in length and 4-feet in continuous width. They were made of wood and were often fitted with a Wheel Cassion of 4 wooden and axled wheels, which made transportation on land easier. Additionally,  Pontoons were joined in “Train fashion” (one after the other).

By 1807, The British Army had refined the used of Pontoon Boat Bridges, and relied on them heavily during The Napoleonic Wars. By the start of The American Civil War in the mid-19th Century, Pontoon Bridges were adopted and used heavily by The Union Army, during their invasion of The South.

In deployment, Pontoons are floated in the water of a desired crossing point, with the Lead Boat well anchored to shore. Successive Pontoons are next placed next to the previous  (width wide), until the other Shore is reached and likewise anchored. Each Pontoon us attached to the other by Stringers. These were either rope or leather lashings, which provided a level of stability. Sometimes, bags of rock or other suitable weights were attached to the bottom of every third Boat, to prevent drift.

Finally, wooden planking was placed over the opossum of The Pontoon “foundation”. Planks ranged from 6 to 8-feet across and were likewise nailed or lashed down. When finished, The Pontoon became a suitable and serviceable Road or Bridge.

Pontoons evolved with Combat Engineering, which larger and more permanent structures seen during World War I and II. By thus time, Pontoon Bridges had to accommodate the much heavier Artillery and of course, Armor (or Tank). Today, when it took several days to construct a Pontoon Bridge, it takes a scant few hours. 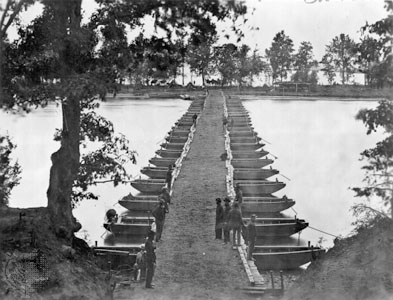