The Pompa Circensis was a form of Procession (Celebration), which was similar to a modern parade. It was held only for official Government celebrations (State) and later, to ''announce'' various Games and Events held within The Colosseum. The practice dates to the 2nd Century BC (Republic) and carry onward thru The Imperial Era. The Parade featured large groups of Musicians, Tumblers and other Performers, often dressed in bright colors.

Occasionally, carts would be added which showed (in cages), the various ''wild animals'' a Spectator might see. Tigers, Lions, Giraffe – all manner of ''wild and wonderful beasts'' were displayed. Also too, captives taken in War or even criminals sentenced to death – were shown. Of course, Champion Gladiators were too given importance as well.

Religion was also an important feature of The Pompa. Priests and Priestesses would follow in ''solem rite'', carrying various images and items of the particular God, Goddess and even Emperor, seen as being responsible for the Event. Pompa's were seen to be just as important a social event as were the various Games and Spectacles that were held throughout Roman Culture. 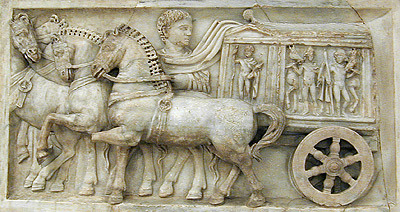