The gesture which has come to be known as ''Pollice Verso'' is linked to Ancient Rome – if more by modern popular convention, than probable historical fact. The hand movement is best a feature on many films and books, each portraying it. The gesture is seen as an extended arm with the hand of choice made into a closed fist. The extension of a thumb digit, as seen was placed upwards (skywards), to denote a good ''judgment''. Conversely, the downward placement of the digit (towards the ground), implied an unsatisfactory one. The Pollice Verso is best related to the Roman Gladiatorial matches when, a near defeated fighter was laid before a Roman Official (Judge). The Judge (in some cases a Crowd), would give the gesture, up for life and down for death.

Historians hotly debate the gesture. Although some surviving account from Ancient Rome mention the Pollice Verso in form, in most cases it is in ''story commentary'' giving one the belief that it may have been nothing more than a literary creation.

In 1872, French Painter Jean Gerome created his Masterpiece work called ''Pollice Verso''. The piece showed the Viewer what he perceived a Roman ''Death Match'' looked like. He too, read accounts by 2nd Century AD Poet Juvenal – which briefly cited the gesture. However, many doubt that the gesture used an upwards or downwards movement, but perhaps a side one (away from the body). With Gerome's work, the gesture was ''cemented'' into popular myth (or at best unconfirmed historical ideology). 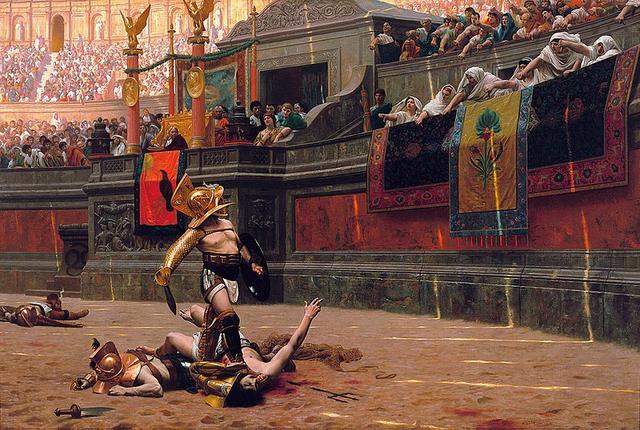