Formed in 1863, the so named ''Zouaves of Death'' – were a Polish resistance Force raised to fight against Imperial Russian annexation of portions of Poland. Their goal was to assist in ousting Russian occupation and influence and restore a Polish-Lithuanian Kingdom. This resistance was known as The January Uprising, which lasted roughly 1 year. The Force was volunteer, and commanded by one time French soldier turned Mercenary, Francois Rochebrune. He styled The Polish Force after His former French Zouave Regiment. Their tenacious approach to combat earned them the rather morbid name ''Zouaves of Death''.

Fighting in many of The Uprising engagements against Imperial Russian, Poland Resistance simply could not maintain any form of effective fighting Unit. Defeated, with the end of The Uprising, so too did The Polish Zouaves. Many preferred to die in ''suicide runs'' against Enemy positions rather than surrender (which no doubt would have led to their execution at any rate). Rochebrune would escape Poland and return to France after The Uprising, rejoining The French Army as an Officer.

The Death Zouaves were noted for their Black Uniform Coats, which covered a Black Vest. Onto this was placed a large White Christian Cross. This was bordered by Poland's National colors of Red and Black. Black trousers and a White Fez/Turban topped their look (although some Companies wore Fez of The National Colors as well). The Zouaves were adept with Pistol, Sword and Musket. None were ever adapted into a Cavalry component. 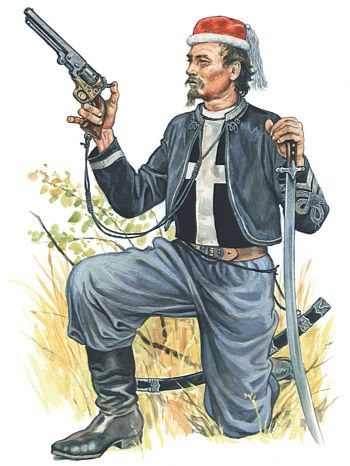