Associated with The Polish Military of the 18th/19th Centuries, The Title of “Uhlan” – was akin to a Lancer. If Turkic-Tartar origins, they are mention as early as the 14th Century in a form. By the 18th Century, The Uhlan as a Light Cavalryman had come into his own. Descended in part from The Polish Towarzysz and Pocztowy Horse Regiments, The Uhlan wore a smug fitting Kurtka-Type Shell Jacket, that featured a large counter colored panel Front (or “Bib”). Mostly double rows of Brass Buttons were seen. Trousers were worn with “Stirrup Straps” built into the bottom cuffs. Rather than a Boot, Uhlan used a tapered toe Quarter Boot, with the Stirrup Strap worn *secured” underneath and outside of the shoe. The Uhlan were noted for the iconic Czapka Hat (as previously mentioned). As Light Cavalry went, The Uhlan originally use The Koncerz Saber, which was an extra long straight blade that was not sharpened, but extremely pointed. This was used as a “thrusting” weapon. Later, the traditional curved Saber and Pistol was adopted, as was the Musketoon or Carbine.

The use of The Cavalry Lance as it’s primary weapon came about at the beginning of the 19th Century . The Uhlan used a longer than normal Pennington on the tips of their Lances, harkening them back to the days of The “Winged” Hussars. By the start of The Napoleonic Wars, Poland fielded many such Uhlan Regiments. The style became popular with many Central European Armies. Napoleon Bonaparte even pressed Regiments of French Uhlan based Units.

By the end of the 19th Century, vast improvements with Firearms and Artillery spelled an effective end to the traditional Uhlan. However, some European Nations still maintained “modernized” versions, up to the beginning of the Second World War (1939). Some variants of the classic Uhlan are still seen as Ceremonial Units, even today. 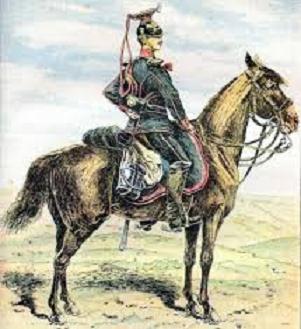