In a 15th Century Medieval Polish Mounted Assault Line, The Petyhorcy would have been the "3rd Rank". Although classified as "Medium" Cavalry, they fought and were equipped as "Light". Historians trace The Petyhorcy to The Ciscassian People, once Vassals of Russia. They were trained and experienced from their battles on The Russian Steppes against The Mongols. As such to their exposure, The Petyhorcy adopted their Enemy's tactics, making them highly sought after. With many joining The Polish-Lithuanian Commonwealth, they were pressed into this role of "Shock Troops". They were Masters of The Horse in this regard. Lightly Armored, some wore simple Chain Mail or none at all. The used a Rondache/Targe type Shield. The Spear was their primary weapon of choice. Of course, their real skill was the Recursive Bow. By the 17th Century, The Petyhorcy had evolved into a traditional and modernly equipped Cavalry Force, similarly identified also as "Hussar". 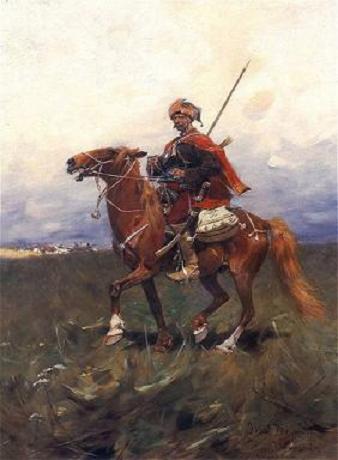