Translated to ''Scythemen'' or ''Scythe Bearers'', these were ''Irregular'' Infantry or Militia – often drawn from the Peasant Class of Poland around the late 18th Century. They were armed with a Militarized Scythe and used for ''close quarters combat'' – much as Medieval ''Melee Men'' were. The Kosynierzy were first formed and deployed during The Kosciuszko Rebellion of 1794. It was during The Battle of Raclawice that same year, that they distinguished themselves in battle and became an impromtu symbol of Polish Independence from Royalty.

They wore no matching uniforms or identifiers, save their War Scythes and traditional Polish Rogatwka Caps (which would be adopted as a standard Polish Military piece of Headgear due to their use). Although never formally adopted into The Polish Army, The Kosynierzy were raised for (3) more Uprising and – although no longer using The War Scythe were known to exist briefly resisting The German Occupation of Poland in 1939. 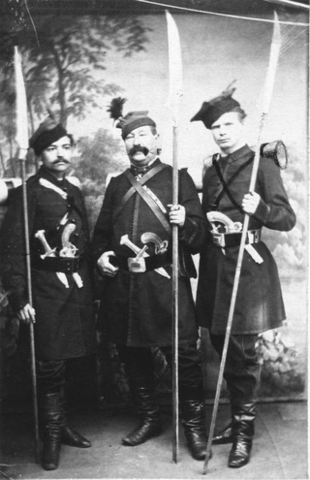