Gen. Thaddeus Kosciusko was a Hero of The American Revolution, having served as an Officer in that Army. After The War, he returned to Poland, with hopes of creating a Rebellion against the Monarchy. His Army defeated a Confederation of Russian and Prussian Allies with Poland. However, depleted numbers and lack of supplies saw his surviving Forces destroyed by Imperial Polish Forces. He was captured and facing execution. Luckily, American Court Diplomats pleaded for his life, which was granted. He left his Nation and returned to America. His 1794 Battle Flag was a Red Field in entirety. Centered, was a Gold Wreath which surrounded a Gold Cuirass. This was surmounted over a Gold Spear crossing a Gold War Scythe. Over the symbols in Polish was the phrase "Free and Defend" (Defend Freedom). 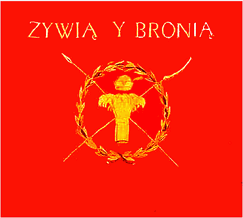