An early design of protective body armor used by Poland's Winged Hussars, starting in the 14th Century, Karacena Armor was comprised of two main component pieces. The first component was it's all leather under-fittings, or Base Foundation. Sections of leather were affixed to one another  (often as much as equal to 2 inches by some examples). Sticking and animal fat "glues" accomplished this in construction. Component pieces included the torso and back, shoulders, thighs, shins - as well as upper arms and forearms (very much as a Vambrace). Next, armor plating was affixed to the leather base of the suit. Samartian Armor used the Ancient Roman Lorica Hamata, or "Scale" process. Hundreds of iron/steel composite metal scales were overlapped and attached (wired and studded). All exposed leather foundation  was covered.

Surprisingly, The Karacena Suit had excellent mobility with regards to range and motion. This suited the needs of The Winged Hussars. Gorgets to protect the neck as well as a variety of specialized helmets were used. Although Chain Mail was common, it slowed the natural movement of a Mounted Trooper, and was a matter of individual taste. This did create The Karacena's one design flaw - it's joints. Enough of the Wearer's "body" was exposed to allow a well placed slash or blow. By the 14th and 15th Centuries, Karacena was replaced by the more traditional Breastplate and Demi-Armor, which was being favored on European Battlefields. It was still used by some "Elite" Forces, such as Archers. 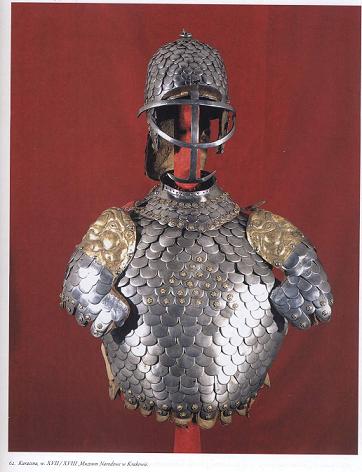