The Polish 1st Light Cavalry was formed in 1807 after Napoleon's annexation of Poland. Assigned to His Imperial Guard regiments, The 1st Light Cavalry consisted of 1,000 Officers and Men. They carried The Cavalry Lance, sword and Pistol. The majority of Officers were taken from the Polish Aristocracy.

The 1st fought in Spain, earning their reputation by (4) successive Charges against Spanish Artillery Batteries outside of The City of Madrid (1808). They also helped to cover Napoleon;s Retreat from Moscow in 1812.

A detachment of The 1st also accompanied Napoleon to his exile to Elbe. At The 100 Days Campaign (1815), The 1st would fight (and bleed) at Waterloo. As foreigners, they were disbanded from The French Army in 1815. They were briefly reformed in 1918 as a Presidential Guard to The President of Poland (2nd Polish Republic). The Regiment's Uniform was Dark Blue with Red Trim. 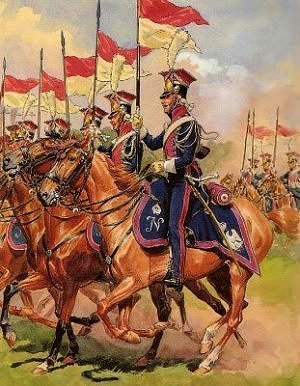