''Plan Z'' was the name given to the operational redevelopment of at first The German Reichsmarine and later Kriegsmarine (Navies), made invalid by The Treaty of Versailles (which ended World War I). While begun (on paper) in 1920, actual retrofitting would not begun until 1938.

The Treaty severely limited Imperial Germany's future ability to make War against any Nation. Any Military Force was left in place for ''self-defense'' purposes only and as such, The German Army, Air Force and Navy was cut down to a ''skeleton force''. No future building of ''advanced'' (future) weaponry was allowed. In short, Germany was to maintain a pre-World War I Military.

Secretly, Germany began to re-arm itself. In terms of The Naval Force, Plan Z was developed. It called for increasing The Fleet to 230 Warships (10 Battleships, 4 Aircraft Carriers and other Heavy and Light Cruisers). Submarines were seen as a ''minor Naval Force'' by many, with little initial interest in developing that Class.

With the rise of The Third Reich and Adolf Hitler, an initial full support was given to Plan Z. It was though that ''when War came'', The French Navy was seen as the biggest threat. England was seen as being Neutral and would not support France again (as they did in WWI). Hitler did surmise a War with England, but not until 1948.

By the start of The European War in 1939, the first German Aircraft Carrier ''Graf Zeppelin'' was ''floated'' (Hull and Flight Deck), but nothing more. Several of Plan Z's Battleships were completed, including the infamous ''Bismarck''. Mostly Heavy Cruisers and Battlecruisers were retrofitted. The actual bulk of The Kreigsmarine was seen by German Admirals as being the overlooked U-Boats.

A series a miscalculations would lead to major Naval victories for Great Britain (which did in fact support The Polish when they were invaded by Germany and later France). Hitler discontinued plans for a modernized Navy – in lieu of other projects ( Rocket developments and Luftwaffe Aircraft designs). In the end, the vaunted U-Boats (undermanned and under equipped) carried the bulk of The Naval War, somewhat effectively in fact. 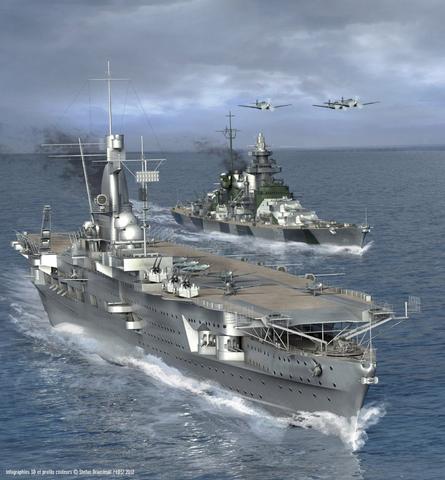