The Placon a' Picot was a French ''relative'' of the Flemish Goedendag Spear. Developed around the 14th Century, The Picot was a cheap to make and effective as a close quarters weapon – as a ''Melee'' weapon. Traditionally, The Picot was made of a steel shaft (unlike the wooden Goedendag). The shaft was hollowed. At the top of the 5 to 7-foot Shaft, was attached a similar iron or related metal sheath Head. This Head featured small Spikes encompassing the entirety. These steel spikes were sharpened 6-inch extensions. A 8-inch steel spike was also attached to the Top Head. The Picot was very effective against Armored Horsemen, as a dismountment weapon. Once fallen, The Picot could be used to batter to a finish an Opponent. Should the weapon become damaged, replacement were plentiful due to their cheap design and production. 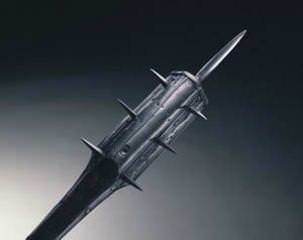