Iconic in appearance even today, The Pith Helmet was used originally as a form of Sun protection. Very light, yet rugged - it was favored by Victorian Era Explorers. Ergonomically designed to fit snug on the head, it's general design featuredo hundreds of small ventilation points built into the general shape (to assist with humility). It's shape incorporated a small pointed front Brim and a slightly longer rear Brim to protect the neck. The Pith Helmet was held on place by a leather chin strap.

Adopted by the British Military as a type of "Tropical Climate" Headgear, it became the standard for "Colonial" Troops. Although most longer made from Pith (a type of plant material from India, harvested and processed into the headgear, hence it's name), Military versions were constructed of heavy Cork, often with leather sheathing inside. This negated the "cooling" effect of The Pith. However, a Soldier is nothing if he is not innovative. It became the practice to punch holes on the sides for increased ventilation. Another common complaint was the bright White color dye used on The Pith. Seen as exposing one's position, many Soldiers took to using Tea to stain The Pith Tan. Eventually, a version was made in this color for Middle Eastern Forces in the 1880s-90s. By the end of the 19th Century, The Pith disappeared from Military use, yet still remained popular with Explorers well into the 1930s. 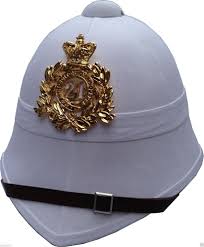