Although the concept of these defensive structures can be traced back to the late Middle Ages, the name “Pillbox” (denoting it''s appearance to a medicine box), is first seen in the late 19th and early 20th Centuries. Normally made of concrete, they are similar to a Guardhouse. They feature Loopholes (for rifles). In World War I trenches, they were recessed into the earth to provide a more protected area for soldiers. In this design they were earthen with wooden timbers for the needed support of the walls. Often, the roof was likewise reinforced. With the development of The “Hindenburg Line”, many hundreds of Pillboxes (concrete) – were constructed of varying sizes and complexity. Often, they were camouflaged (with the advent of Aircraft) – to prevent them being seen from the air. Another example was France's “Maginot Line”. In this case, Pillboxes were part of a complex, underground/tunnel accessed plan. Recessed Gun Turrets, Guardhouses, etc were all joined together in a “running defensive line”. Some Pillboxes were also fashioned for medium-sized cannon and artillery as well. Their construction was based on need. Some walls could be up to 5 feet thick (and as thin as 2 feet). They featured a single entrance and (again depending on need) – could accommodate as few as 3 to as many as 15 soldiers. Many fine examples of World War I (and II) Pillboxes have survived. 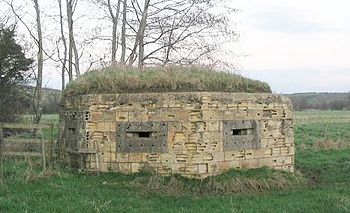