This formation was developed by The Swiss for it's use by Swiss Infantry on the battlefield. Although "The Square" formation was used for centuries by many ancient armies, a Pike Square consisted of 100 men in a 10 x 10 formation. While moving, the Pike weapon was carried vertically. Troops were trained to be able to point their weapons in any directions while stationary - with troops to the front of the formation kneeling (to allow the men in the Center (or back), to point their Pikes over their heads). While not moving, the Pikes were "butted" or placed into the ground (or against the strong leg and foot, facing outward). This stance provided the necessary resistance needed to the Pike (from the enemy side). Squares could be "connected" with on another to form a battle line. If the formation was surrounded, the Pikes would be pointed in all directions.

A well trained trooping of "Squares" would be able to change directions very quickly. Their speed made it difficult for cavalry to outmaneuver them. The Square dominated the battlefield and determined how battles were fought well into the 17th Century. Even with the advent of firearms becoming more common on the battlefield, the Pike Square continued (owing to the low velocity and slow rate of fire). Many "new"  riflemen still carried and relied on their Pikes and Spears. When firearms developments and innovations became more reliable, adaptations of the Pike Square were adopted for riflemen. 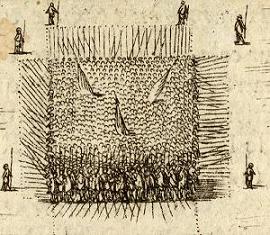