The Pike and Shot Formation and Tactic was a popular battlefield component first developed during The Italian Wars ( 1494-1559). The dominate weapon of many battlefields was the 15-25-foot Infantry Pike. It's deployment was argumented by the Pike Square, a 4-sided Formation which placed these weapons outward from all sides. A typical Formation would consist of 300 Pikemen and 150 to 200 Arquebusiers (or Riflemen).

With the advent of practical Firearms, their unique use (at the time), was seen as an increase to the force of The Pike. Thus was born The "Shot and Pike" Formation. In deployment Riflemen would be interspersed into the Pike Ranks. They began to be seen as a Force Multipler. The Shot and Pike was very effective in haulting Cavalry Charges. This gave Infantry an edge.

The use of Shot and Pike was heavily used by many Mercenary Units, and would spread into general use throughout Europe. By the 17th Century, Spanish Tercios had refined the tactic to it's ultimate use. The advent of more effective Artillery, would cause the demise of The Pike  (but not Firearms). 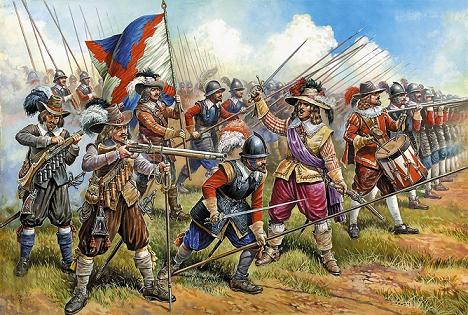